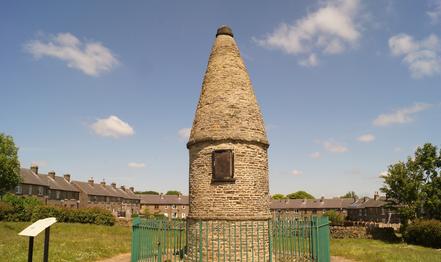 A Brief History of our village

The oldest standing structure in the Village
The plaque on the Steeple tells us that this was re-built in 1776!
What do you know about the Steeple?

GRANGE MOOR, the village where we live and play, is not an ancient village. We do not appear in the Doomsday Book. We have few claims to fame, but as a place to call home did not exist, unless you were a sheep, until the Industrial Revolution of the early nineteenth century.

Grange Moor has existed since mediaeval times, and was owned by Monks from Byland Abbey in North Yorkshire who founded Denby Grange in around the year 1200. It appears that the name Denby means “the village of the Danes” (Stephanie Short in her short booklet – Grange Moor. A village and it’s Church). It is also thought that Grange in this context refers to the land being its farm.

For the next couple of hundred years it seems that the Moors were used exclusively for sheep grazing with records of few human inhabitants. The Monks left Denby Grange by the 14th Century, and following the dissolution of the Monasteries in the reign of Henry VIII the land was bought by a local landowner who continued to keep sheep on the moors until the late 18th century by which time coal had been discovered and made the land more valuable. Open cast mining began during the 18 century and it was probably around this time that dwellings began to spring up and people began living on the moor.

In the early 19th Century other pits opened and it is thought that Shuttle Eye Colliery opened in 1837, as its centenary was celebrated in 1937. There is the suggestion that in its early days Shuttle Eye Colliery was engaged in open cast mining with deep seam mining developed possibly in the 1850s. Shuttle Eye Colliery eventually closed in 1971, the last pit to close in the village with miners dispersed to other local pits.

Grange Moor Village grew up around the pits, and it is not clear just when a village identity was established. It does not appear that this was before 1820 when the land at Grange Moor was the site of the Grange Moor Rebellion, that never was!

1820 was year of protest. There was much distrust of the political system, and unrest from men who, having returned from the Napoleonic five years yearly, could not find work. On April 1 a gathering of some 2,000 men in Huddersfield marched on the town with the intention of taking it from the garrison stationed in the town. When further marchers, expected to join them, did not turn up the men dispersed.

This gave rise to further feeling of unrest and 12 April several hundred men from Barnsley and other nearby villages gathered on Grange Moor, believing they were to be joined by others from different parts of the country including the suggestion of men from as far away as Scotland. No one else turned up, except for 20 men from Huddersfield! Disappointment led to their dispersal although a number of the men from Barnsley were later arrested and indicted for high treason.

This mention of Grange Moor in this connection appears to have been before the village became established. The Grange Moor Brass Band was formed in 1854, which would suggest that with Shuttle Eye Colliery now firmly on the map and the rich tradition of pit bands bringing a Band to the area that a Village existed at that time.

A school was established in 1879 providing education for local children with 94 pupils on the school roll.

The Anglican Church had presence in the village, with pastoral care being provided by the Parish Church in Kirkheaton in whose boundary Grange Moor lay. The Village did not have its own Church Building until 1898, although Church services had been held in the village with the first official service taking place in the dressmaker’s cottage in 1894. Plans for a Church building were approved by Whitley Upper Urban District Council in 1897 with Church License signed on May 23 1898.

There was also Methodist connection in the Village since 1848, which was maintained until the closure of the Methodist Chapel on Briestfield Lane in 1996.

In her very interesting book on Grange Moor Church , A village and it’s church, Stephanie Short  records that there had been shop in two cottages in Clough Gate since 1853, but in 1877, the Co-op bought the Methodist premises in Chapel Row and a year later the Methodists opened a bigger chapel on Briestfield Lane. This was followed with the opening of the Blacksmiths Arms and later the New Inn. Clearly a Village was evolving with spiritual, educational, social and economic needs of a developing village being provided right in the heart of the community.

This brings us to the turn of the end of the 19th century, and the birth of a new century that would see the further development of the mining industry in the Village, upheaval with two world wars and subsequently the decline and demise of mining in Grange Moor.

We will pause at this point, and will pick up the history again later in the year We will welcome contributions from residents with memories of life in the village, as a scholar, a member of the Churches, a miner or a mining family and maybe as a newcomer to the village more recently after the mining community became a mining heritage. Let us have your views, thoughts and if you can photos to be begin putting together a more detailed history of the village that we call home.

With grateful to Stephanie Short for allowing me to share the information from her book, mentioned above, in this brief history of our VillageLast update 27 February 2017